-
-
Home
/
The Convent of Kirkjubær 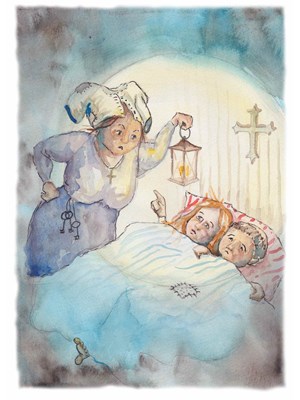 A convent of nuns was formed at Kirkjubær (Churchtown) in 1186. It was situated below a somewhat steep mountain that had a lake on top. One day two sisters made their way to the lake and it is said that they saw a golden comb reaching from the water. One of the nuns tried to reach it but drowned. The other one found a horse nearby and went on it into the water but they drowned too. None of them have been seen since, and the lake has since been called Systravatn (Sister Lake).

Nearby there is large pillar of rock that can only be mounted using one narrow path. It has a flat top with two hummocks that are believed to be the graves of the sisters. For this the pillar is called Systrastapi (Sisters Rock).

A contemporary convent of monks was in a nearby community. It is said that the abbot and the monks from the convent had a habit of visiting the nuns. When they reached a hill on the way, from where they first could sight their destination, they always started singing and this hill has since been called Sönghóll (Singers Hill). When they were heard coming the abbess would call for the ringing of the bells and she and the sisters would walk to meet them, at a place later called Glennarar (Spreaders).

There was much jubilation every time the monks came on a visit, and rumor has it that the monks came primarily to fool around with the nuns. The sisters and the abbess were all aware of this and stories can still be told of this.

One night when the monks were on a visit the abbess was up checking on the sisters. When she was about to reprimand a nun she had found in bed with a monk, the nun said: „What is that you have on your head, dear mother?“. Discovering that she had mistakenly grabbed the abbots’ underpants she walked away saying: „We are all sinners, sister“.