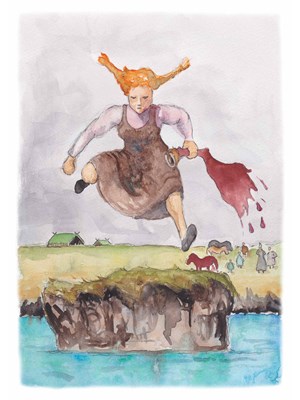 Jora was a promising but short tempered young woman, the daughter of a farmer. One day she watched her fathers stallion, of which she was very fond, humiliated in a competition. She became so mad that she ripped one leg off the other horse and ran away with it. When she reached a nearby river she grabbed a huge boulder from the cliffs close by and threw it into the middle of the river. Leapfrogging the river whe uttered:

She then went into the mountains, where she settled in a place later called The Cave of Jora. She would wreak havoc among men and animals, frequently ambushing them at a gorge later called Jorakleif, robbing or killing them, once she had finished eating the horse. This would go on for a long time making the area almost uninhabitable, as noone had the strength to subdue her.

Now, with no means to confront Jora, a young man emerged. On one of his many travels to Norway he met the king, told him the story of Jora and asked for his advise.

The king told him that he should go to Jora at sunup on Whitsunday, „because there is no creature so vile or powerful that it isn‘t sleeping then“, said the king. The king then handed him a silver decorated axe and said: „You will find her sleeping face down. Strike this axe between her shoulderblades. Jora will wake up and say: „Let hands be fixed to shaft.“ You will then reply: „Let axe separate from the shaft.“ These words will cause Jora to stumble into the nearby river with the axe still present. Eventually the axe blade will drift into a river where Icelanders will form their Parliament.“

The young man gave his thanks to the king for the advise and the axe. He then returned to Iceland, and killed Jora. The axe later drifted into a river, that hence was called Axe River (Öxará), where Icelanders would form their Parliament.