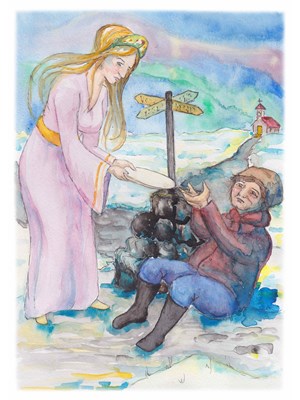 Some say that crossroads are, e.g. on hilltops or mountains, from where four churches can be seen. Old belief is that men should spend Christmas Night outside because then a new year begins and still today one counts his years by the numbers of Christmas Nights. A man having lived 15 Christmas Nights is said to be one of 15 winters. Eventually New Years Eve marked the beginning of a new year.

When men sit at a crossroad, elves from all around will join in and try to persuade you to go with them but one must not abide. They will then offer one all kinds of things, gold and silver, clothes, food and drink, but one must not accept anything. Elves disguised as one‘s mother or sister will ask you to come with them, every trick in the book is tried.

But come the new day one must stand up and say: „Praise the Lord, a new day fills the air“. Then all the elves will disappear leaving their wealth behind for one to keep. But if one answers or accepts any offer from an elve one becomes enchanted and goes mad and will never again be at rest.

Once a man called Fusi sat out on Christmas Night and had resisted temptation for a long time, until an elve woman brought with her something to eat. Fusi turned his head and said what since has become a widely used phrase: „Rarely have I refused the delicious tallow!“. He then took a bite and went mad and became crazy.