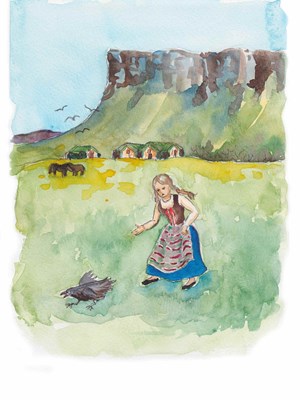 A farmer‘s daughter had the custom of feeding a crow outside her home at meal time. At one time the raven did not take what she handed to it from the window. This surprised the girl and she went outside to feed it. Although always likely to eat the raven retreated further and further from the house. Suddenly a loud noise was heard from above the house followed by a landslide surrounding them on both sides, not reaching them but engulfing the house and everything in it, living and dead. Thus the raven rewarded the girl for the feeding.

It is said that a bishop once had his tent raised on the spot where they were standing, blessing it as well.

Three years later a shepherd‘s horse stumbled on the ruins where a woman had been entrenched in the pantry. As the avalanche had taken place in the autumn she had enough food to survive all this time.