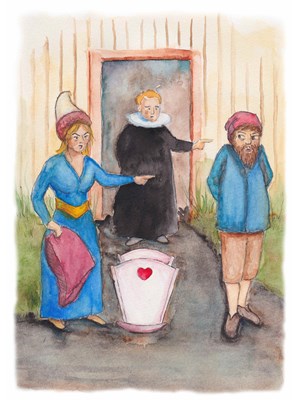 In ancient times it was common to go by boat to a remote skerry to catch birds and eggs. This journey was dangerous and could only be done in calm weather. On one such occasion a man had to be left behind because the weather suddenly turned for the worse. This also proved to be the last time that summer that the journey to the skerry could be made because of continuing bad weather and high seas. The man was therefore believed dead.

Surprisingly, during the first trip the following summer, the man was found to be still alive and well. It did not look like he had spent a particularly hard time there but he did not give any explanation as to why. He was brought back home to a joyous reunion.

Late that summer at a mass a cradle was found standing outside the church. In it was an infant, no one claimed to know, covered with a sumptuous blanket. However, because of the mystery surrounding the man‘s survival the priest asked him if he knew any details and whether this child should be baptised. The man replied coldly that he knew nothing. At that moment a pretty woman suddenly appears, grasps the blanket, throws it into the church and says: “The church shall be none the worse for it”. She then angrily turns to the man and tells him that he will become a whale of the worst kind. Finally she disappears with the baby and the cradle and was never seen again. The man became mad and transformed into a whale with a read head, like the color of the man‘s cap, lending it the name Redhead.

Later, the man‘s mother is believed to have told about her son‘s whereabouts at the skerry. He supposedly was housed by a pretty elve woman. He wanted to go back home though and she permitted him to, on the condition that he would have their unborn child baptised when she brings it to him to church, or else suffer grim consequences.

Back to Redhead. It went on to sink many ships, drowning many men, and no one could stop it. But having killed two of his sons, an old priest decides to try. With the aid of his daughter and a stick, he managed to have Redhead follow him far inland, up rivers and waterfalls, to a lake that is now called Whalelake. This ordeal proved to much for Redhead though and it has not been seen since, but colossal whale bones found at this lake lend truth to this story.